By the time any one of you reads this, Kristoph will have left this world. Last particles of air pulled into tired lungs only to be gently released in a final sigh. The drumbeat of his intricately designed heart giving its last reverberation. Stilled forever. The beautiful breath of God that perfectly held his tiny body together for over three years coming to a dramatic climax and ending in a peaceful, silent conclusion.

A lot has happened in these three brief but full years. My very first, long, solo drive was a fourteen hour trip to Kalkaska, MI to retrieve him and his brother, Carlos. Those two rode back in the hood of my favorite sweatshirt. They experienced the joys of driving–when the car broke down along the interstate just a half-hour or so after picking them up. They also kept me company in the worst motel that night—when cell phone service was terrible, someone peeked in my window, the room was as cold as ice, and the only thing keeping us safe was God.

Just a couple short days after returning home with them, I left for a mission trip to one of the most picturesque places in the world—El Golfo, Mexico. I returned a different girl with a different life to live, big surrenders to Jesus, and a deep brokenness in my heart.

Just another couple handfuls of days later, I again left Kristoph for Atlanta, GA, for the Passion 2012 conference. It was in that arena that God began to do a major work in my heart and also started healing the wounds from a long-ago lived life. I came back but not the same. I did not belong in America anymore. This was not home.

There were many evenings spent in my blue Adirondack chair in front of the screen door, holding the boys and pouring out my heart to a God who heals the broken. We enjoyed the smell of freshly mowed grass, the heavy fragrance of rain in the clouds, and the occasional rainbow over the bare field. It was a place of healing waters for my soul and I had my “pocket buddies” to be companions for my thoughts and words.

Over the years, I continued to grow up and down time became less and less. Life gave way to more college, new jobs, new relationships, new churches, the death of Carlos, a couple moves, deaths of friends and a teacher, and a deeper darkness in my soul than I’d ever experienced before.

But through it all, I continued to come home to Kristoph and experience his deep peace in his ordinary life. He was happy to see me up to our final good-bye. My heart found a place to rest with him and I felt that life would go on, when I would take the time to just be and not always be doing.

Just a few days before Kristi’s last, I knew he was going to be leaving me. His eyes began to cry and stain his white face. His final day, he pushed his special food away and I knew that he knew. He did not want to do anything but be with me. His last evening, I held him and sang to him. We rocked in front of the big window, and watched the wind shake the wires in the evening light. The blow up snowman across the street nodded to us one more time, before decompressing into a crumpled pile on the ground.

Joseph and Harvard came over to sniff Kristoph. I tucked him into his little carrying pouch that Kat made for times like this and prayed over his fragile, small body. Tears falling on his face and dancing off his whiskers as I asked Jesus to take him home. I washed his face, rubbed behind his ears, and stroked the space between his eyes. He rested peacefully and seemed sweetly resigned to death coming for him. I cuddled him next to my face for the very last time, sang Chris Tomlin’s “Jesus Loves Me” to him one more time, and said my final good-bye to him.

Then, gently snuggling him in into his blue pouch, I put him on the water heating pad, and whispered to his dear dying face that I’d always love him more. More. Always more. But no matter how much I loved and love him, the greater honor was being loved deeply by him.

And with each little life, I again learn more about the importance of loving deeply, being present in life, the greater strength in letting go instead of hanging on, and dying well—dying with full confidence in Jesus and a huge trust in all that he has been and will be for me.

All will be well. Jesus died for me.

The terror of death was defeated by the spilled blood of a Savior. And forever overcome by a great risen and reigning King.

All will be well. Jesus loved me then. And loves me still. 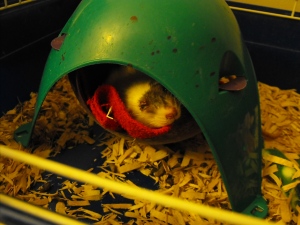 One thought on “Kristoph”